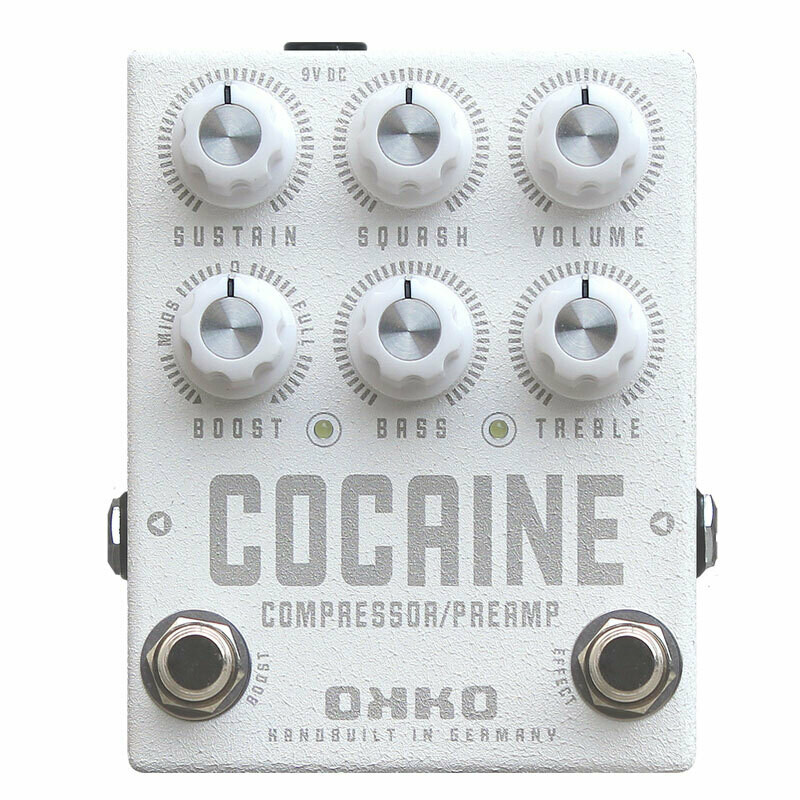 The Cocaine features the same optical compressor circuit as its little two-knob brother, the much beloved COCA COMPRESSOR but offers a lot more controls and tone-shaping features.

The compression is controlled by two knobs. They do pretts much what their labels say:
SUSTAIN adds nothing but clean undistorted sustain to your tone.
SQUASH goes from subtle tone-enhancing to a more pronounced compression effect, but even at full tilt it will preserve the attack of your instrument and keep its character.

VOLUME allows for a clean boost, unity gain is around 12 o’clock.

BASS and TREBLE are active (cut/boost style) controls for an effective tone shaping.

The BOOST knob controls an entirely independent circuit, activated by its own footswitch, just like another pedal in the same box. It’s located after the compressor in the signal chain so you can set the comp and eq for your base tone and hit the boost switch for solos (or the other vice versa) . The BOOST knob is something special. Its neutral setting is at 12 o’clock. Turn it to the right for a full-range clean boost or to the left for a lead boost with tighter bass and pronounced mids.

The COCAINE is not only a transparent, natural sounding and exceptionally quiet optical compressor, it also serves as a preamp, active equalizer and dual clean boost.
Whatever you plug in – electrical guitar or bass, piezo-equipped acoustic guitar (or any other stringed instrument) – the Cocaine will make it sound more balanced, sit better in the mix and generally just... better :-)
You’ll probably get addicted soon, hence the name.

Like most of our pedals, the COCAINE features an internal voltage doubler for increased headroom and superior dynamic performance.

Save this product for later 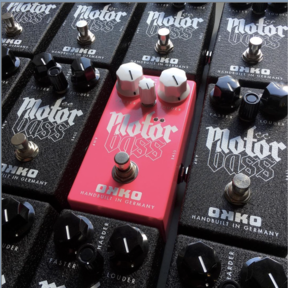 Since the official launch of OKKO FX in 2003, thousands of our pedals have found their place on the pedalboards of sound enthusiasts all over the world. Every pedal is handbuilt by actively touring or retired musicians and technicians here in Leipzig, Germany. We are very proud of what we achieved over the years and give our best to create great-sounding and tour-proof sound tools for you, whether you’re playing stadium shows or in your bedroom.